During the Covid emergency SWAMP activity on the Reggio Emilia pilot progressed mostly on line.

The lockdown started in Italy on March 9 and ended on May 4.

Last SWAMP wide-ranging mission on the fields, was planned at light-speed on February 27, when the fear for the lockdown was increasing. And the first happy missions after the lockdown are dated May 12 (ground mission) and May 22 (drone flights mission).

On February 27, the first Drone mission over the 3 pilot farms was completed, and this was the only February held mission during the three years  project span. The mission was complemented by local LAI estimation with ceptometer based measurements, the first of the year, with very little vegetation at that time (see picture). 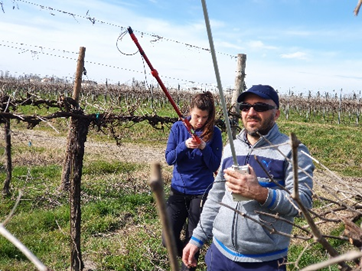 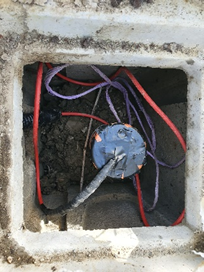 On the same day a piezometer, that had its cable cut from a tractor some time before was put back in place after being repaired at UNIBO.

The piezometer is located at -4.5 m depth, in a vineyard, in the area where the soil moisture sensor from Andrè is installed underground. This sensor sends its data, as a pulsing heart, every hour through a Lora connection, since its installation occurred almost a year before (June 7 2019), and it acts also as a vital sign of the swamp platform in Italy. 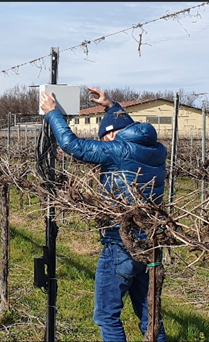 In the same place there are three Meter soil moisture, conductivity and temperature muti-sensors installed at three different depths. Data were previously collected on a data logger and on the same mission the data logger was replaced by a LoRa multisensor node entirely designed and developed within SWAMP.

On the same mission a faulty data logger was found in another farm and promptly replaced with the data logger just removed from the vineyard. 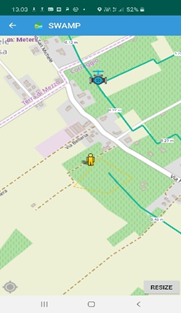 On the same day the Dugarolo App was tested in its ability to support the operator in the identification of the channels in the irrigation area. 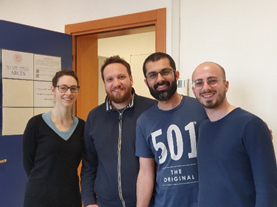 On Feb 29 Jeferson Cotrim, from UFABC who spent 6 months working on the setup of the SWAMP LoRaWAN servers at UNIBO left Bologna, to go back home, just in time to avoid being catched by the lock down in Italy. 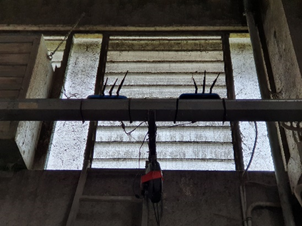 Few days after the 27th feb mission, after the lockdown start,  the multi-sensor node stopped sending data. At the same time, in Bologna, we were discussing about LoRa connections reliability and coverage. So we were envisioning to increase the connectivity reliability adding public-private redundancy.
In fact, after our first installation, the local authority LEPIDA started the set up of an experimental LoRa network intended to support also the agricultural areas.
Nowadays the network has three levels of redundancy:

During the lockdown, the SWAMP Multisensory node has been updated and several features for node remote control and diagnostics are now available.

The Smart Water Management Platform is now showing its potential. Data about sensors, weather, irrigation, crops and fields are now collected by  the platform and available through its user interface.

The SWAMP team will report about the project achievements and results at a Special Session of the IEEE MetroAgriFor conference (Metrology for Agriculture and Forestry), that will be held in Trento  in November 2020.

All the interested readers  are invited to participate to MetroAgriFor and share experiences submitting a paper to the special session on Sustainable Sensing for Smart WAter Management in Agriculture (S3WAMA2020).

Simulations with Criteria 1D model were continued offline, during the lockdown period, in order to set the parameters which better represent the real conditions of the fields.

A new release of the “Dugarolo App”, which is supporting the Gate Keepers in managing the water requests on a daily basis  is being tested and a final release will be available for download soon.

Testing of the deployment of 12 water level sensors are ongoing , in order to verify their  correct configuration, Lora connectivity and operation within the SWAMP platform.