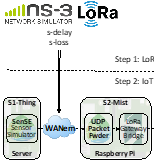 The SWAMP project published a paper in the 2020 IEEE International Workshop on Metrology for Agriculture and Forestry (MetroAgriFor 2020) reporting a performance analysis of the LoRaWAN LPWAN technology for smart agriculture. Understanding the tradeoffs of LoRaWAN for IoT-based Smart Irrigation proposes of a two-step methodology to evaluate the performance of LoRaWAN based on simulation for understanding the behavior of the air interface and measurement for understanding the behavior of the IoT Platform. This paper provides insights to understand the tradeoffs of LoRaWAN deployments that may be useful to anyone considering starting a massive deployment of IoT smart applications, particularly in agriculture. 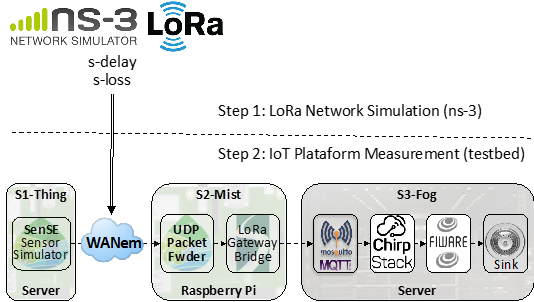 The picture below shows the scenario represented in the experiments of Step 1 and 2, namely the farm hosting the MATOPIBA pilot of the SWAMP project, with four circular parcels irrigated by a center pivot where corn, soybeans, and cotton crops take turns all over the year. Each parcel was evaluated independently of the others to avoid cross interferences among different distances and understand the effect of distance in LoRaWAN performance 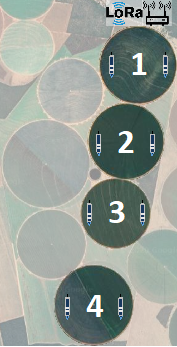 We evaluate an emulated scenario with up to 10,000 sensors in conditions very similar to those found in field deployments. The LoRa air interface is captured by simulation using ns-3, whose results are fed into a testbed that emulates sensors transmitting LoRaWAN packets and using the typical software components of any real deployment. Our evaluation used a synthetic sensor workload and a simulated LoRa air interface, but from the LoRaWAN gateway on, the IoT Platform is similar to those used in real deployments.

Delay results for Parcel 4, varying SF and sensor density, reveal a general low growth rate when the number of sensors increases, but a high growth rate as the SF increases. On the other hand, packet loss skyrockets as the density increases, becoming intolerable from 1,000 on, as most packets are dropped.