The SWAMP project published a paper in the 2020 IEEE International Workshop on Metrology for Agriculture and Forestry (MetroAgriFor 2020) reporting the soil sensor probe developed by the SWAMP Project. Enhancing Soil Measurements with a Multi-Depth Sensor for IoT-based Smart Irrigation reporting a multi-depth and multi-parameter probe for soil data collection utilized to on-farm research by the SWAMP project. The probe is based on LoRaWAN communication and has sensors for soil moisture, temperature, and electrical conductivity.

The sensor core module (left in the picture below) is based on the ESP32 system on a chip, a power supply block, and the interfaces to sensors, secondary acquisition boards and a Radio Communication module. The communication module accommodates the wireless solution according to the network needs (LoRaWAN, Zigbee, Narrow Band, among others). The sensing module is composed of directly connected sensors and additional acquisition boards, which will convert the analogical signal from sensors into digital format. The picture in the right presents the SWAMP probe with three sensing units (left) at 20, 40, and 60 cm depths, and one sensing unit in detail with the acquisition board exposed

The chart below shows 25 data packets sent by the probe. The raw data shows the moisture levels varying during the period of data collection. The peak between the tenth and the sixteenth packet presents the behavior of the sensor during an irrigation session. 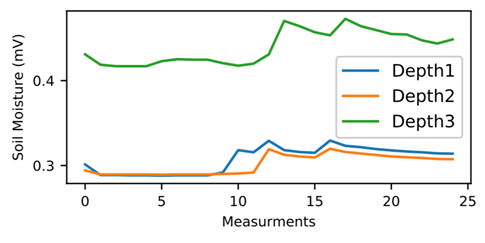 The validation of the solution was made in real deployments in two pilots for smart irrigation. The data obtained by the probes is sent to a cloud platform, where a user can see and analyze the data. The probe electronics can also be used in other applications of smart agriculture.