The SWAMP project published a paper in the Workshop of Cloud Networks (WCN 2019) promoting openness as a critical factor for providing interoperability and facilitating the interaction of new and existing pieces of an end-to-end IoT smart application. Designing an Open IoT Ecosystem advocates that the promotion of collaboration for building a healthy IoT ecosystem will be highly influenced by various levels of openness of the solutions, such as open-source, open platform, open services, open data, and open knowledge

We identify different possibilities for an end-to-end IoT Smart Application to deal with the three phases of an Input-Process-Output Model. In the center, we represent the SWAMP approach for the Intercrop pilot. It is also currently the most common one, where the platform must be developed, and sensors and actuators must be controlled directly by the platform. This picture also illustrates different interactions in an Open IoT Ecosystem. The bottom strip depicts an end-to-end system where sensing, platform, and irrigation belong to the same company. Furthermore, there might be a variety of platforms that provide and use different services among each other. 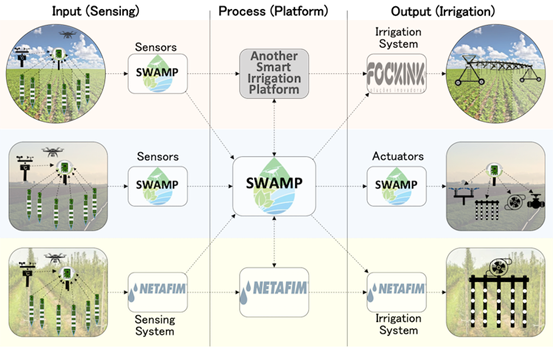 The picture below represents only one possibility in the specific case where the input (sensing), process (platform), and output (irrigation) belong to different organizations. 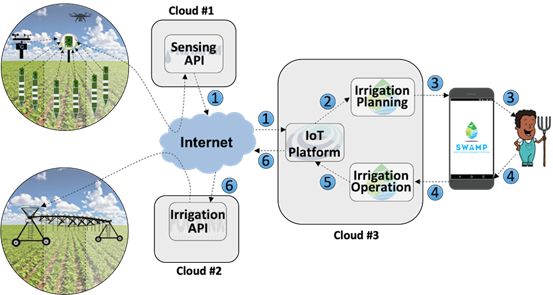