The SWAMP project published a paper in the 2020 IEEE International Workshop on Metrology for Agriculture and Forestry (MetroAgriFor 2020) reporting the process for obtaining a linear equation for the calibration of soil moisture sensor measurements. Calibration Equation and Field Test of a Capacitive Soil Moisture Sensor recognizes that many IoT solutions rely on the use of soil moisture sensors to gather data, in real- time, from the plant’s root zone. This study presents a linear calibration curve, obtained by the thermogravimetric method, for a capacitive soil moisture sensor for a silty clay soil.

The curve obtained has an adjusted R2 of 0.86 and a residual standard error of 2.8%. The soil sensor was tested in the field during the end of February revealing that the sensor is capable of indicating changes in soil moisture within the error obtained from the calibration procedure and that it can be used to indicate changes by rain or irrigation procedures.

During the experimental procedure, the incorrect soil compaction might lead to measurement errors, which can compromise the final calibration model. One evidence relies on data from sample 1, in which an outlier was observed between sensors values of 18,000 and 22,000, and water content values of 20% and 30%. 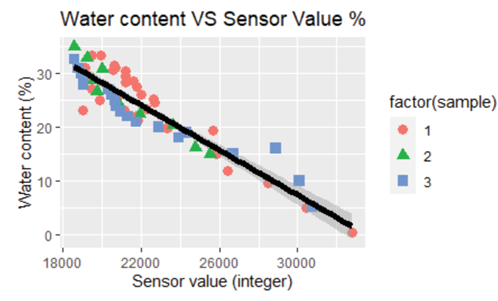