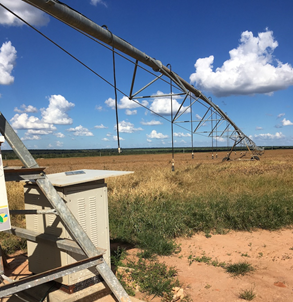 The MATOPIBA pilot is a Center Pivot of 100ha out of seven installed in Rio de Pedras farm, located about 40 Km from Luis Eduardo Magalhães municipality, state of Bahia in Brazil. The city is known as the capital of Brazilian agribusiness. This on-farm research pilot is expected to be a showcase for the neighbor farmers. The Cerrado, a savannah climate subtype, prevails in the region and can help the irrigated soybean production to reach 80 sacks per hectare. However, severe droughts can reduce this number to 30 sacks per hectare, as one occurred during the 2011/2012 season,  and at a high electrical energy cost to pump irrigation water. The main MATOPIBA pilot objective is to reduce energy costs by implementing a smart irrigation system based on Variable Rate Irrigation, VRI. Four management zones were identified in the pilot area, and a site-specific irrigation model based on soil moisture data is in development to produce the irrigation prescription maps to be downloaded to the VRI controller in a daily basis. A soil sensor array is a crucial instrument for that approach.

Therefore, the first step to implement the MATOPIBA pilot was to develop a multi-depth and multiparameter soil probe solution based on the capacitive principle and LoRaWAN technology. At first, seven prototype units were installed in the pilot area to evaluate the probe behavior in operation. So far, we have obtained raw data from each management zone for eight months. Several operational issues with the probe and the LoRaWAN infrastructure (Gateway and Server) faced during the data gathering help us improve the data streaming. We have recently obtained by the gravimetric method the calibration curve for the soil collected in three depths of interest from each management zone of the pilot. It allowed us to run a post-calibration process over the raw data to obtain the soil water content necessary to feed our water need estimation model under development. 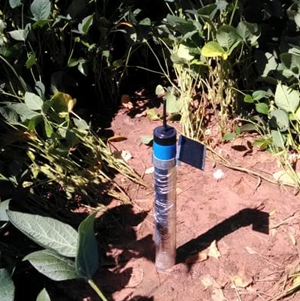 We are looking forward to seeing some results soon. The large amount of soil data collected at short sampling intervals (as short as 10 min) provides us with detailed spatial and temporal variability of soil water content. The model we are proposing is innovative by making use of recent technics of data analysis and, at the same time combining well-established models like the WOFOST crop growth model developed in Wageningen.

A question to be answered is about the advantages and possibilities of using a not-so-accuracy but low-cost capacitive soil probe in more significant numbers. The expectation is that a large volume of data can give more useful information than a small volume provided by a limited number of accurate and relatively expensive probes. We are working on an ARM architecture-based circuitry to make our IoT probe even more feasible to help us answer that question.

Last but not least, an essential next step is to turn the conventional center pivot of MATOPIBA pilot into a variable rate capable pivot, the so-called Variable Rate Irrigation, VRI. This transformation is going to be accomplished by a cooperation effort between the SWAMP project team and two relevant suppliers of center pivot industries. The first one is an innovative Brazilian maker that supplied the center pivot for the pilot farm. The second one is a well-known multinational that is suppling and partially investing in the kit of valves, the positioning system, and the controller to allow the variable-rate irrigation. The two project partner companies have a great interest in the SWAMP results.